The Ole Miss men’s basketball team turned in arguably their best game of the season, using an all-around performance on both sides of the floor to roll past Florida 68-51 Saturday afternoon in The Pavilion. Holding the Gators (14-9, 6-4 SEC) to their lowest point total of the season, the Rebels (12-11, 3-7 SEC) allowed their fewest in an SEC game since 2015.

The Ole Miss defense forced 15 turnovers, which led to 16 points on the other end. Florida was limited to a 33.3 percent clip (18 of 54) from the field, including only 21.7 percent (5 of 23) from beyond the arc. The Gators entered the contest averaging 77.2 ppg in SEC play, ranked third in the conference.

Senior guard Breein Tyree finished the Rebels’ perfect week with another solid performance. The SEC’s leading scorer in conference games increased his average with a game-high 23 points. KJ Buffen continued to play strong against the Gators, falling one rebound short of a double-double (14 points, nine rebounds). The sophomore also added four assists without committing a turnover. Devontae Shuler stuffed the stat sheet with 14 points on 5 of 9 shooting as well as five assists, three steals and three rebounds. As a team, the Rebels shot 47.3 percent (26 of 55).

The Rebels revved up the defense right from the start. After Florida made its first two buckets of the game, Ole Miss kept the opposition without a field goal for nearly nine minutes. The Gators missed nine consecutive shots, and Ole Miss took advantage with a 10-0 run. Shuler drilled a three before Tyree rattled off seven straight points. The senior nailed a triple of his own and followed it with a deuce. Stealing the ball at the top of the Gators’ key, Tyree drove to the other end of the floor and pulled up from the elbow for a transition jumper. The sequence put the Rebels up 19-8 midway through the first half.

Ole Miss led by 10 when both teams went scoreless for four minutes. Tyree broke the drought with a jumper just inside the arc to push the cushion to a dozen, 31-19. An Andrew Nembhard three sparked an 8-0 run for the Gators, but a smooth spin move by Buffen on the block gave Ole Miss a 33-27 lead at the half. Tyree’s 12 points paved the way.

Florida scored four quick points to start the second half to quickly make it a two-point game. However, the Rebels did not relinquish the lead. With the margin doubled to four, Ole Miss went on an 8-0 run while keeping the Gators off the board for five minutes. Shuler and Buffen scored four points apiece during the spurt, forcing Florida head coach Mike White to call timeout with his team down 48-36.

After the Gators got the game within single digits, Tyree bumped the lead to 13 with a pair of NBA-range threes. The game’s margin would never get back within single digits. Closing out the contest, the defense locked down and held Florida scoreless for the final four minutes. A dominating performance on both ends of the floor ended in a 17-point victory. 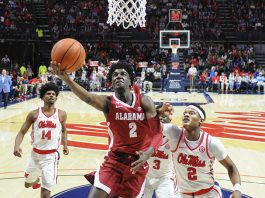 College basketball seasons may be saved by plans for bubbles in...